Another of Those Catch-up Posts

2019 did start of with a rush!  Lots of easy steady holiday sewing, and then some serious, I've got get this done, stuff!  Then a 12-hour plane ride and back.  Should be back into a calmer mode... until the new house building starts!

To start off, in February, pictures of my office door being adorned with a logo, and my name (just in case I forget where my office is !)- it's a first for me!   Actually it's nice to no longer be in a fish-bowl.  As we share offices with another non-profit, this is to keep things straight!  Also had the air-con upgraded, with the attendant disruption and mess. 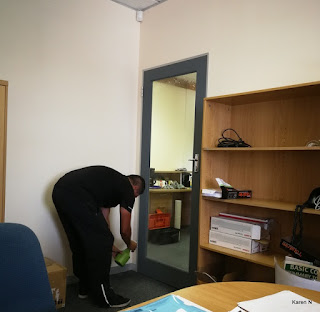 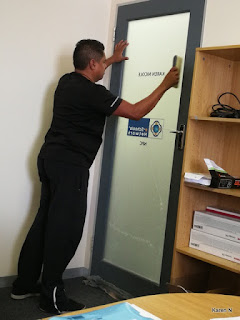 I had a mad, mad rush to meet the end of February dead-line for submission of the final assignments for the South African Quilters' Guild's Quilt Teachers' Accreditation Course.  This is one of the two practical pieces submitted, a small wall -hanging, 24-inches square, own design.   Now that is back with me, the ribbons will be removed, I only added them to meet the three embellishment requirements... really, I avoid these like the plague!  The buttons are obvious, but I think you may have difficulty finding the third embellishment! 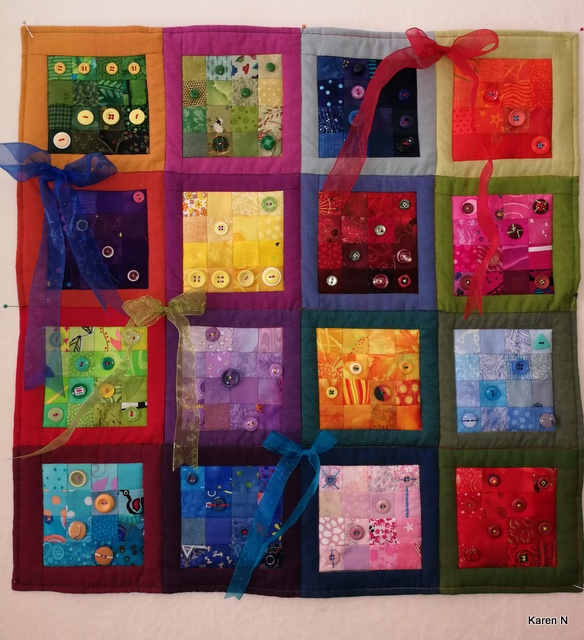 I did make time to make blocks for both February and March Block Lotto.  February's blocks were mailed off to the winners from....


...Wales, where we went for two weeks, mid-March, to see our darling growing family, with a flying stop in London to see our son at Uni.  E does sit still occasionally, but not for this photo, trying desperately to get down.  Grandpa amazingly patient with the little guy, many times up and down the staircases. 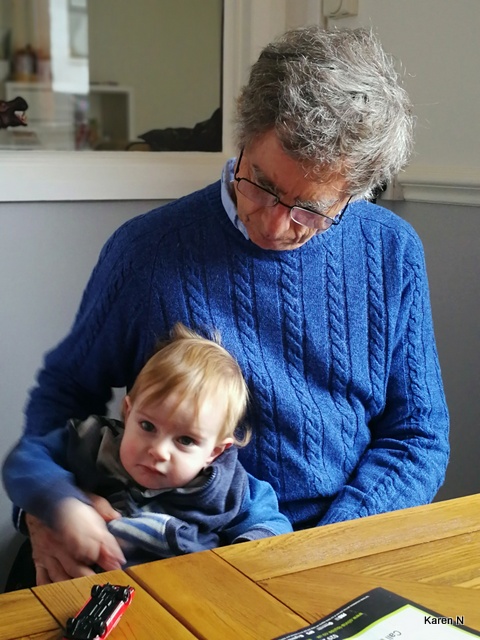 I did manage in the first week of March to finish his quilt.  The back was a lovely brushed cotton flat sheet.  All his Dad's family are in the airline business, and my father-in-law (his great-grandfather) flew a plane like this in the 1930s, from Europe to South Africa, hence the theme.  As we all were sick at one time or another in Wales, photos are rare, but did get these of him and the quilt: 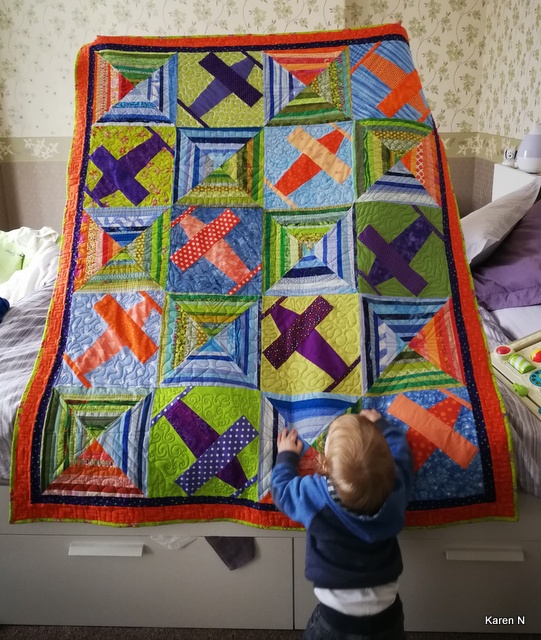 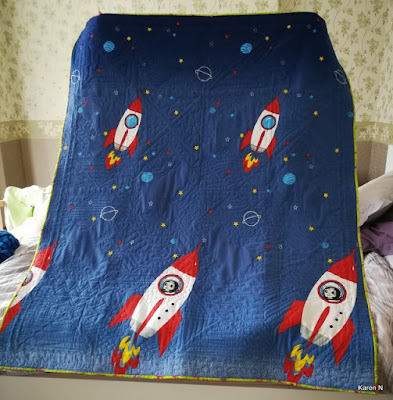 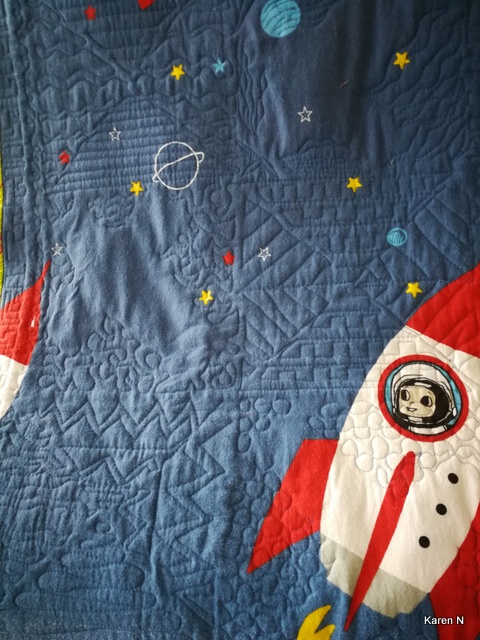 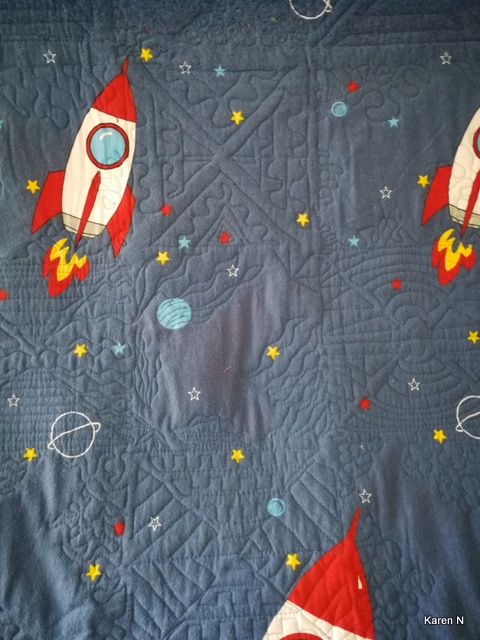 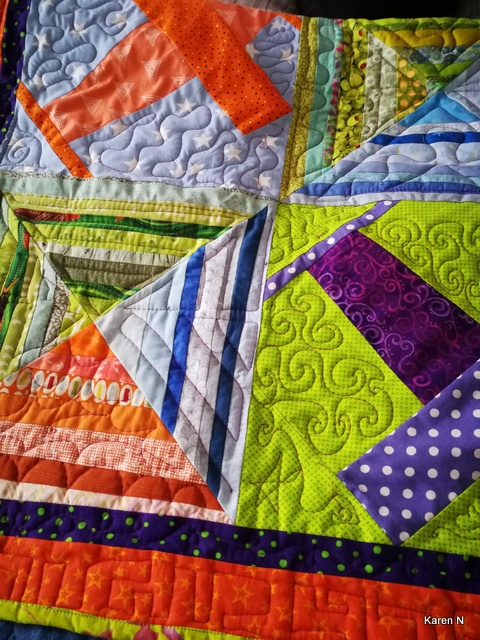 In other sewing, Angela at SoScrappy has been running a block a week project this year, the blocks are small (4.5 inch finished) and are sooo cute, that they could not be resisted!  Each is either set square or on point, the grey "sashing" is a lovely local brushed cotton.

We went to the American Museum at Bath and will post pictures of the Kaffe Fassett exhibition soon, and yes they said please take non-flash pictures, and please post them on social media.  So will oblige!  But there a quite a few, and need sorting out.
at 23:03 1 comment:

I wish that I had the inspiration/stamina/time to write a blog post every day!   I know that some bloggers dictate their posts, but that doesn't seem to be in the spirit of writing!


Everything here has been quiet, except for The Wedding of very good friends yesterday.  This was supposed to happen in November, but the Bride-to-be tripped and broke her ankle, so it was postponed.   Lots of happiness, John and Corrie! 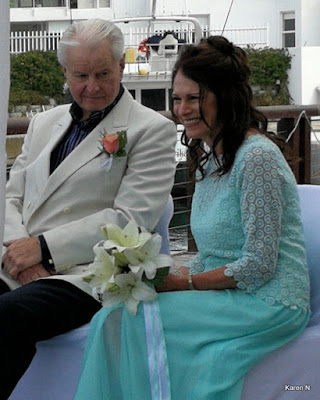 Some recent stitchings, in the order that they were started, but all were/are sewn as the mood took/takes me:

A glimpse of some of the blocks for grandson E's next quilt, just two more aeroplane blocks to make.  Have had fun using up lots of strings for the triangles.  Blocks are 12-inches unfinished.  Something went wrong the the enlarging/copying of the pattern, but they were close enough to the size wanted! 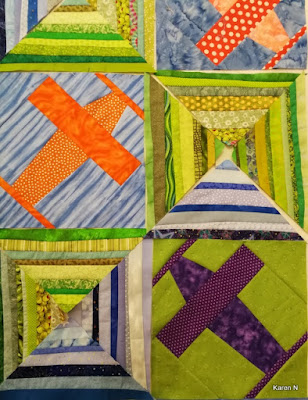 Bonnie Hunter's year-end mystery.  Again a glimpse of some of the two different centre blocks.  All blocks have been sewn but not sewn together. Border pieces ready to go.  I'll try to link up later with the other quilters who have been playing along with the mystery. 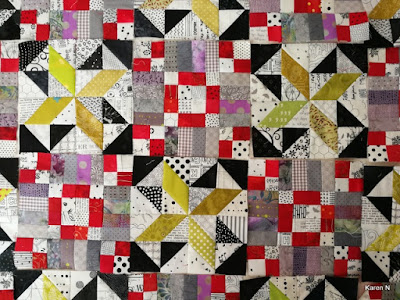 These are the first two weeks of a quilt along at Angela's blog:  Soscrappy.  She has called the quilt-along for RSC2019, "Tiny Tuesdays".  Each block centre is small!  Which means they sew up pretty quick!  Making blocks like this is, besides finding use for well-matured fabrics, a way of just trying out a block that may or may not be new to you, but sometimes leads on to other things! 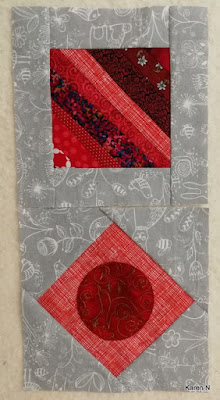 And last, but not least, January's Block Lotto blocks, "Fireballs".  I made three of these 6-inch blocks.  This is really another fun way to stretch your skills - even if you don't participate, try a block or two each month for yourself. 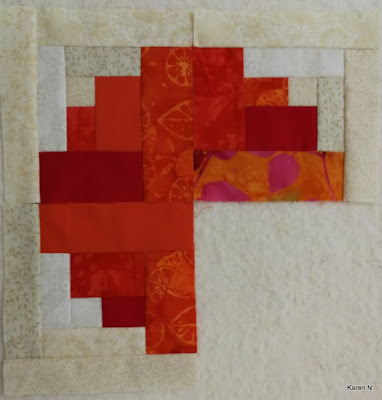