Well, as 2018 will be a milestone year for me and, seeing as I am drowning in started projects, I want to see if I can finish a lot of them in this year.  (I was going to write the number...but am back-pedalling already!)

In theory I will have more time than before.  The amazing school at which I worked part-time for 10 years in accounts has been acquired by a larger and growing school group and they, sensibly, have centralised accounting.  There may have been a position for me had I been interested but it would probably be a full-time commitment.  I have mixed feelings, sad to eventually no longer be formally involved, but happy for the school, and I am sure I will find excuses to visit.  Still have the other day job, but will have more quilting time!

Some projects are fairly close to being finished, and I am sure to start more, and I have an even bigger pile of unstarted projects (mostly just on scraps of paper as I think of them!)  I think it will be self-defeating to commit to finish one a week, so will work on groups of them in relays...all will have some progress at least.

I was going to list the projects with pictures, progress, next steps, etc, but think I might be embarrassed by the list.  If I find some time I'll add it in a separate tab.


First, the results of recent holiday sewing.  These are left over blocks from a quilt group mystery we did earlier this year.  I wanted to clear the design wall and not have another pile of orphan blocks.  It might be used on the back of this project.  The other 192 blocks are carefully clipped together in sets waiting for the urge to sew them.  This mystery used a new-to-me way of making the half-square triangles, and I used it again in the mystery below! 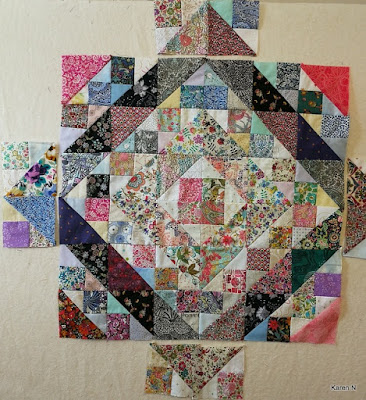 Then these are all the blocks from Bonnie Hunter's mystery, eagerly awaiting the next part of instructions: 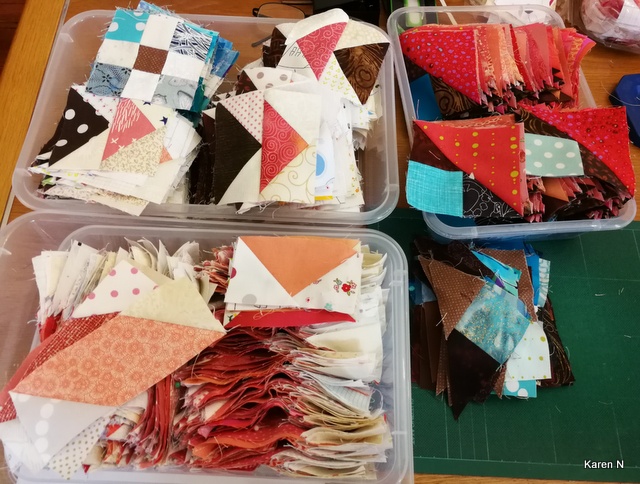 Followed by all the bonus half-square triangles, pressed and dog-ears trimmed: 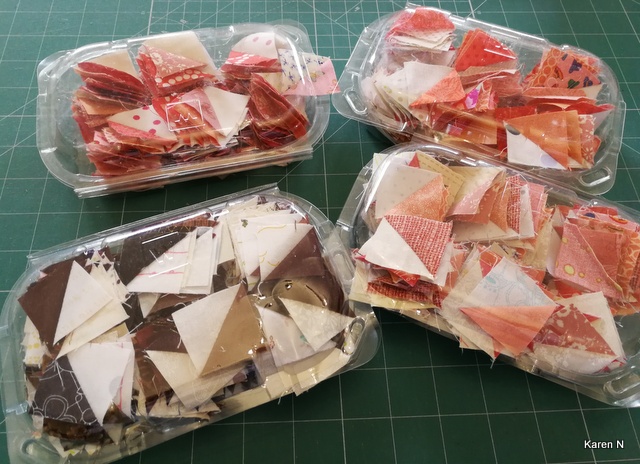 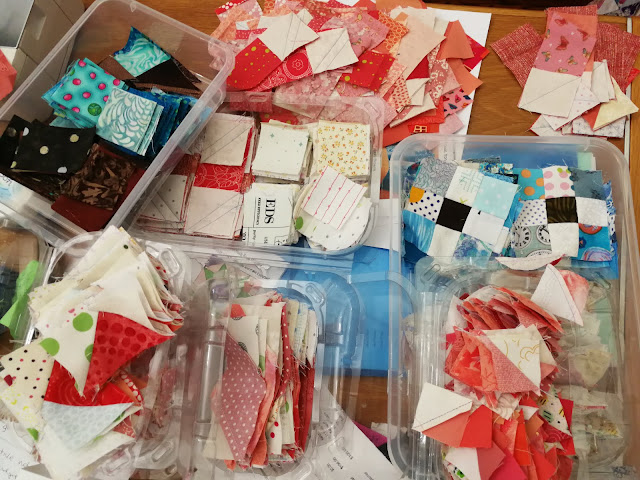 All the cutting done, parts 1 and  2 sewn, half of part 3 and a test sample of part 4.  And all the bonus triangles stitched into squares!   I took them to my Thursday evening group and pressed them there... it took the better part of two evenings!  And now no meetings till mid January...boring bit will be done at home!  For part 1 I had almost enough squares in my filing system (just short of 12 brown squares) to not use strips.  I don't have much in brown, but making do!

Go and see what other Mystery participants have done so far, at a link up with Bonnie's Monday share of On Ringo Lake.

Our very special Siamese cat was called Ringo, sadly she succumbed to a very nasty feline virus some years ago.   Daughter C insisted on a cremation...and her remains are in a tiny urn, with her name, on the mantlepiece.

Emerging from a blogging slumber

It has been five months in which I did not make the time to blog.  Guilt at not finishing much might have played had a big part.   Some sewing was done in this time, but very few photos taken.  So this is a catch-up post, and a promise to myself to do better.   I am having fun trying out things on a new smart phone (the last one was a non-android smartish-phone)... hope that this will facilitate more posts.  All these photos taken with old phone.

As daughter C decided to go visit her love in Australia, I HAD to finish the two quilts for my Grand-Nephews, so she could take them with her (instead of worrying about the postal service.)  The one for C (born at the beginning of 2017) was a top, and the one for L (born November, the day after she arrived in Aus) was just in the thinking stage when she booked the trip.    The squares on both are mostly novelty prints which, I am glad to say, just about used up all I had.    I couldn't post pictures, as I wanted them to be a surprise.  Both are about 50" x 70".

And with the happy news of daughter T expecting her first-born/my first-grand next March I will have to sew some more!  Although she seems to finishing more quilts than me...at the moment!

I did do some knitting for my grand-niece.  Her name is Grace; my sister, her grand-mother, started a school called Blue Moon Montessori School.  How could I not use this yarn for a cardigan for her!  Except the dye ran when she washed it with all the white baby stuff..some now a pale shade of pink!   Pattern thanks to Ruth .   Have made one in blue for T, pictures only when buttons added! 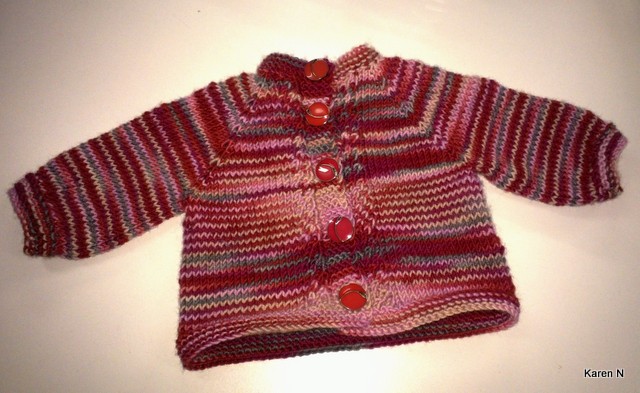 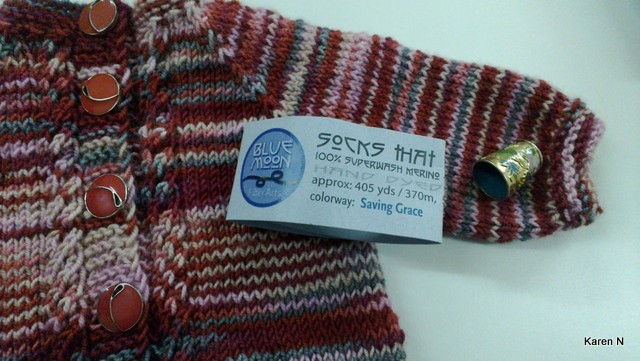 And some other bits of sewing.  The start of using up 1.5" strips, off to a shaky start, but will give the construction some more thought.  This is one of the RSC projects. 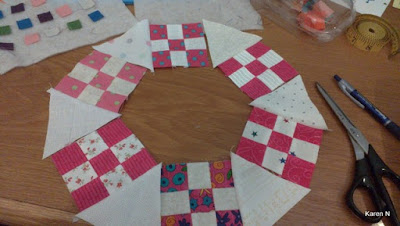 And this is what you do with 1-1.25" wonky bonus half-square triangles.  Sew four together to make a wonky windmill.  Add random purple strings.  Add a variety of 2-2.5" greens and trim to 5".  All good to this point.   Then don't sew into groups of four-with-a-border and groups of four-with-sashings... you get two different size blocks!   Eventually added just six strips of purple to get it all fitting together.  Top done!  But this has been over a long time, even had daughter C sew some of the windmills.  This was her first time sewing anything like this, and as she says, her last!